Coconut oil has long been used in ancient and modern traditions as a hair conditioner. Coconut oil contains high amounts of medium chain fats and saturated fats which give the oil the semi-solid consistency. In the recent years coconut oil has gained a lot of interest and has been promoted vastly as a “miracle oil” for cooking or supplementing in the daily diet. Though the origin behind this recent promotion is not clear, it is important to know whether this food is safe and healthy to be consumed in the diet.

When I first heard about people eating and promoting coconut oil, I was shocked and my first instinct was to tell them to stop, knowing coconut has high saturated fats. But before I did that I decided to investigate further and find the truth behind the buzz.

Why the Buzz?
Certain populations in the tropical areas (Polynesia, Sri-Lanka and Thailand) have traditionally used coconut oil in cooking and observations of these populations and their lower disease profile lead us to assume that a diet rich in coconut oil can prevent certain disease such as heart disease, diabetes, Alzheimer’s etc. Some recent studies also showed the reduced risk of heart disease, and many people claim it has cures for many diseases, because it has more vitamins and antioxidants. However, it is highly possible that the lower rates of diseases may not be associated with coconut oil but the other healthier food choices and habits that these islanders undertake, such as consuming higher amounts of fruits, vegetables and fish or their higher amounts of daily physical activity as compared to the industrial population.

The Good News: Coconut oil is extracted from coconut copra (the meat or kernel of the coconut) is produced as the hydrogenated copra oil or the virgin coconut oil (cold press). The cold pressed method is least intrusive and requires low processing, which preserves and maintains most of the nutrients in the virgin oil. Virgin coconut oil showed many health benefits in experimental and observational studies, primarily because of the medium chain fatty acids and antioxidants in it. Virgin coconut oil was shown to increase the amounts of good cholesterol and had an overall positive effect on total cholesterol profile, and improved bone structure and immunity in some studies.  Virgin coconut oil when compared to hydrogenated coconut oil has higher vitamin E, A, and other components which have antioxidant and heart disease prevention properties. Most of these studies were done on animals, and very few long-term human trials and observations have been conducted. 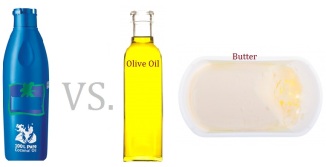 As mentioned above, virgin coconut oil seemed to have a positive cholesterol profile, by modestly increasing the good cholesterol. However, those experimental studies also reported that the oil also increased the bad cholesterol and triglyceride levels in the blood, although the amount was less than that of butter but still higher when compared to profiles of vegetable oils.  And no clinical studies showed evidence of health benefits of coconut oil for the treatment of Alzheimer’s disease, diabetes, gastrointestinal disease or viral infections.

Virgin coconut oil is not more “healthier” than other vegetable oils, since it contains the same amount of calories and does contain a significant amount of saturated fat which is not recommended for a heart healthy diet. There is still a lot of debate over this subject and no conclusive evidence to prove the health and safety benefits of this oil. Everything, including virgin coconut oil, should be used in moderation and occasionally.

Eat the coconut as a whole, since the oil comes from the fruit, and everything you find in the oil, you will find in the fruit and much more. Eating coconut itself will provide you with more vitamins and minerals and the much needed fibre which you would not get from the oil, which is only fat. Now that you know the good and the bad, take charge and make your own decisions and follow your heart.

4 thoughts on “Coconut Oil: To Eat or Not To Eat?”

This content is for educational purposes only and should not be used to replace recommendations made by your doctor or health care providers. You should always consult a physician or dietitian before making drastic changes to your diet.

The content is produced and distributed by the "Modest Nutrition" team. Unauthorized use and reproduction of these materials are prohibited, unless permission is requested from the administrator (dietitian@modestnutrition.com)